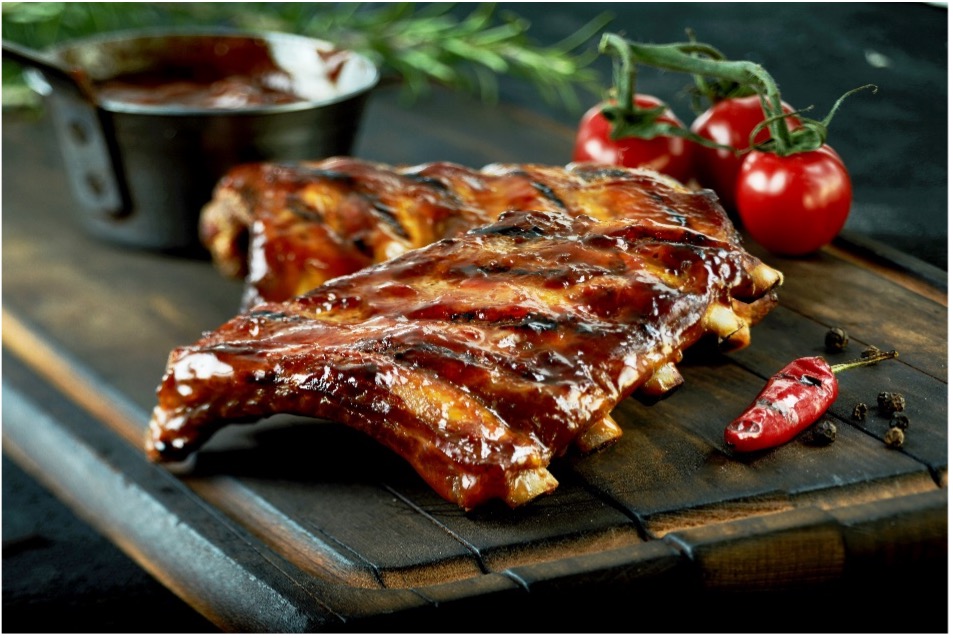 First prepare the ribs for grilling. Remove the membrane from the underside of the ribs, since it remains tough even after a long time on the grill. The membrane also prevents the spices from reaching the meat and, as a result, impairs the final flavour.

Rub both sides of the ribs with a generous amount of spices and place them on the grill previously set up for indirect grilling.  Indirect grilling is a process of cooking food away from the heat source, meaning that the charcoal is placed only on one half of the grill or pushed to the sides, and the meat is cooked with the grill lid closed. For juicy and tender ribs, they need to be slow-cooked at a low temperature in three stages. First, grill the ribs at 150 degrees Celsius for 3 hours.

Remove the ribs from the grill and wrap them in tin foil. Place the wrapped ribs back on the grill and leave to cook for another hour.

Then unwrap the ribs and grill them for about another 15 minutes. While on the grill, brush the ribs with the BBQ sauce several times and season them again with the spice mix.

The page you requested could not be found. Try refining your search, or use the navigation above to locate the post.

We use cookies on our website to give you the most relevant experience by remembering your preferences and repeat visits. By clicking “Accept All”, you consent to the use of ALL the cookies. However, you may visit "Cookie Settings" to provide a controlled consent.
Cookie SettingsAccept All
Manage consent

This website uses cookies to improve your experience while you navigate through the website. Out of these, the cookies that are categorized as necessary are stored on your browser as they are essential for the working of basic functionalities of the website. We also use third-party cookies that help us analyze and understand how you use this website. These cookies will be stored in your browser only with your consent. You also have the option to opt-out of these cookies. But opting out of some of these cookies may affect your browsing experience.
SAVE & ACCEPT